Are you ready for the new cell phone law AB-1785

January 1, 2017 AB-1785 becomes effective in California. Under the new law drivers will no longer be allowed to hold their cell phones in their hands for any reason, including using any of a phone’s apps, such as music playlists or maps.

Under the new law, drivers can still use their cell phones if they do it hands-free, which often means voice activated and operated.

However, phones must be mounted on the dashboard or windshield. With a phone mounted, the new law allows the driver to touch the phone once, to “activate or deactivate a feature or function … with the motion of a single swipe or tap of the driver’s finger.” 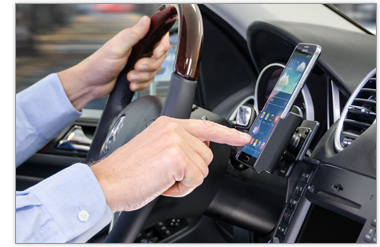 Drivers can also attach the phone holder to the dashboard in a spot where it doesn’t block the drivers’ view of the road or get in the way of airbags.